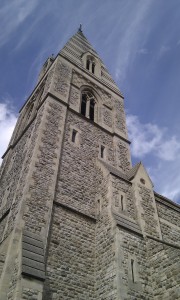 The Church of England is an institution with roots reaching far back into British history. It has presided over changes in law, monarchy and societal trends, and it has updated itself (albeit reluctantly) in order to reflect movements in national thought. So why is it digging its heels in so strongly over the proposal to include civil partnerships within the definition of marriage?

As one irreverent wit recently highlighted on Facebook, it is ironic that the Church of England is making a fuss about changes to marriage law when it was itself created by Henry VIII so that he could get a divorce, something that the Catholic Church would not allow him to do. Humour aside, however, and after much research, I think I’ve finally worked out what their problem is – but before I release this particular puppy from its catapult, let’s have a quick review of how I reached my conclusion.

I wasn’t convinced by the line in the papers about how passing this legislation would undermine the Church’s status as principal administrator of State marriages in the UK and alter the meaning of marriage for everybody (with the implication that this would be a bad thing). I really don’t understand how this claim can be substantiated. For one thing, the C of E’s own website states that, in the present day, “more than a quarter of all marriages in England take place before God in the traditional setting of a Church of England church” – I’m just going to assume I’ve misunderstood something fundamental about the definition of State marriages, because “more than a quarter” does not constitute the lion’s share. (If you have a decent explanation for me, please leave a comment.) For another, why would including gay couples in the definition of marriage dilute the meaning of marriage itself?

The Church appears to define marriage as being between a man and a woman because matrimony is first and foremost a precursor to procreation… so why doesn’t it have a problem with elderly hetero couples getting wed for reasons of companionship? They sure as hell aren’t marrying because they want to have kids. And does this mean that infertile couples’ marriages are also invalidated in the eyes of the Church because their union won’t produce offspring? In the Church’s opinion a loving, stable relationship, sanctioned legally through marriage, is the best environment in which to raise a child – those who enter into a civil partnership are making the same level of commitment, so how could this water down the meaning of marriage?

My search for a coherent, reasoned argument – unsurprisingly thwarted by trawling through online media – took me to the Church of England’s own website, where they’ve put up an explanation regarding the Church’s views on civil partnerships and the current proposed changes to “marriage”. Their statement was revealing. While the Church supports civil partnerships – or “friendships”, as the Archbishop of York calls them – it maintains that a “marriage” is traditionally between a man and a woman and that the State has no right to change this – doing so would, in fact, change the definition of “marriage” for everyone. It also maintains that it is arguing for the protection of “marriage” – not just religious marriage but civil marriage as well – and that anyone suggesting that religious marriage be treated separately is failing to acknowledge the Church of England’s established role in providing State-recognised marriages to religious and non-religious couples alike.

This is a pretty weak argument, for several reasons. Firstly, the Church would appear to be advocating the stagnation of British law in order to protect the status quo (primarily for itself, that is, as society needs change in order to remain healthy). I would argue that even the Church, although admittedly long established and still to some extent involved with law-making in the UK, should not have the power to halt the evolution of our legal system just because it doesn’t like the proposed changes. To say that it is trying to protect the definition of both religious and civil marriages actually weakens its position – if separate definitions of religious and civil marriages existed, then to change the definition of civil marriage would in no way affect the definition of marriage for those who might object on religious grounds to the inclusion of same-sex legal partnerships within said definition. And for any married, hetero couples who might object on non-religious grounds, surely the redefining of marriage as “a state into which two people may enter, who love one another and wish to take on the legal responsibilities and benefits that such an arrangement would bring” could draw no objection, as it would be a blanket definition that applies to everyone and would therefore take nothing away from the meaning of a marriage between a man and a woman.

The Church also argues that there is no need to redefine marriage, as civil partnerships provide the same legal rights to same-sex couples as marriages do to straight couples. (I looked this up – they’re virtually identical. There’s some different wording, obviously, but that’s about it.) So, in fact, what we have currently, in our already highly complex legal system, is two ways of saying the same thing – isn’t this a bit pointless? If civil partnerships and marriages provide the same things to couples, and marriages aren’t exclusively religious, and all partnerships are recognised as equal in the eyes of State and Law, why as a society do we need to have one “traditional” and one “modern” definition of love-based partnership?

The Church of England really shot itself in the foot when it allowed gay people to become vicars, as it very publicly and officially put aside the Bible’s argument against homosexuality when it did so. Now bereft of that religiously-sanctioned homophobia, it is forced to come up with weakened, trivialised nonsense in order to try and hang on to marriage as the sole purview of the straight. What the Church now has, in fact, is a percentage of its religious representatives who are forbidden by their own institution to wed! Oh, you’re a gay vicar? That’s progressive; isn’t that cool that you can continue practising your faith without having to deny your sexuality… Oh, but you and your partner have to remain celibate, and your Church won’t let you marry your partner, in the sight of your own God or otherwise, despite your devotion and unshaken belief? That’s… fucking nonsensical, hypocritical, degrading and tragic. What kind of “organised” religion are we dealing with here?!

I think what the Church of England should really be concerned about (and perhaps it is, deep down) is the potential schism looming between those religious organisations that wish to perform marriages for same-sex believers and those that think marriage can only be between a man and a woman. It has, in fact, already garnered a backlash from some of its own vicars for its arguments against the inclusion of same-sex couples in the definition of marriage. Additionally, as the proposed legislation would actively disallow gay marriages in a religious context, the Church is potentially looking at some serious future arguments in the European Court of Human Rights. But as the C of E survived the admission of gay vicars, so I suspect it will survive this, with a mixture of grudging compromise, popularity contest antics and no doubt more embarrassing statements along the way.

So, after my “quick” overview… my conclusion? Rather anticlimactic, I’m afraid: that the Church is afraid of change, paranoid over losing its grip, and confused about what exactly, in the modern day, it really believes.

Family Division judge Sir Paul Coleridge, describing the rise in divorces in the UK as a “destructive scourge” on society, is to launch The Marriage Foundation charity this week with the primary goal of “championing marriage as the gold standard for relationships”. Figures for 2009-10 supplied by the Office for National Statistics showed an increase in the number of divorces of almost 5% across this period, and The Marriage Foundation claims that cohabiting couples are ten times more likely to separate following the birth of their child than are married couples.

The charity would appear to be sending the message: “get wed and all will be well”, but Sir Coleridge insists this is not the case, advocating an approach of “absolutely grinding away at [the relationship]” in order to “end up with a product that is really worth having”, rather than falling for the seductive and unrealistic images of Happy Ever After portrayed in celebrity magazines.

Neither of these options seems particularly healthy to me. At a superficial (and probably flippant) level, I can’t see how encouraging more couples to tie the knot is going to do anything except cause a further increase in the UK’s divorce rate. But more to the point, surely a stable home for a child is most likely to be provided by a couple who are committed to each other and do not feel the need to legally bind themselves to one another, as if for some kind of additional security? And would not couples who are committed to one another also be more likely to work through their problems, rather than storm out of the family nest in a rage and seek out the nearest lawyer? There’s nothing like a legally binding contract to make you feel all the more trapped during the bad times – and what kind of incentive is that to work on your problems?

People shouldn’t be rushing to get married because they need legal reassurance in their relationship, or because they’re not sure what to do next, or because they’d hate their kid to have a double-barrelled surname. I mean, how bizarre is this longstanding legal tradition, anyway? “I really like you but I’m frightened you might leave someday, so I want to make it really costly and prohibitive for you to do so, and mark you with the gold band of ownership so everyone knows you’re my property.” Oh, hello ancient Rome, didn’t see you there.

If you and your partner are happy together, let it be – as the old adage has it, if it ain’t broke, don’t fix it. And if you want to bring a child into that, go for it, but don’t do it unless you’re sure, because that’s a whole new human being you’re potentially toying with. Don’t fret over the stereotype that society might not take you seriously as a couple if you don’t ‘put a ring on it’. That kind of attitude may even damage your relationship in the long run. And if you’re in the kind of relationship that could be damaged by what society thinks of it, well…

I suspect that what Sir Coleridge is really seeking is a rise in the number of less childish, more responsible, less selfish and more caring Brits – and I would argue that a legal document has no bearing on any of these qualities.