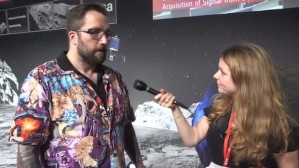 Never mind what he’s saying – look at the shirt, dammit!

Imagine you’ve been working on an awesome project. It’s groundbreaking; it’s going to further scientific understanding of our universe. Its progress is being broadcast live around the world. You’re so fucking excited, so you pick out your lucky shirt – a handmade gift from a friend – to wear. It’s gonna be a good day. Maybe in the back of your mind you’re also thinking, hey, live TV, that’s some great advertising for my friend, this is a way I can thank her for the shirt… Or maybe you’re not thinking any of that. Maybe it’s just your favourite shirt.

I’m just speculating here, but, back in school, those pretty and popular girls weren’t really interested in the science nerds, were they? Intelligence wasn’t attractive, I bet? Did it feel like things had come full circle, now that some mean girls have made you cry in front of everyone?

I’m sure you wore that shirt because you love the design. But, secretly, I just bet you love the design because you routinely objectify women and see them as nothing more than visual aids to your sexual gratification. Because you’re clearly just an animal, driven by carnal needs, incapable of using your brain (that lander probably just jumped on to the comet all by itself, right?).

No fucking way is it possible that the imagery on your shirt could be construed as art. There are no naked women in art. There are no beautiful women in art. And no way could you, a man, be capable of appreciating art. Oh, and you aren’t allowed to express appreciation of the female form, either – perhaps you didn’t know that. Because perhaps you haven’t been keeping up with the news. Because, well, you’ve been busy.

I am ashamed to share a gender with anyone who would make you feel so guilty as to apologise on a live broadcast during what should have been the most exciting event of your life to date. The only overwhelming emotion you should have felt was joy; instead, it was ruined because some people can’t abide depictions of the female form or the idea that men could find them attractive.

Drawings of the female form are not by definition sexist, any more than drawings of the male form would be. Objectification, as far as I understand it, has to be of an actual person, not a cartoon character. And just because someone takes offence to an image, it does not give them the right to change the definition of sexism for some kind of fast-track validation of their feelings. We should be more careful to examine why we are offended by something, rather than lazily branding it part of the latest on-trend-thing-to-be-offended-by. We should also consider that the person who has unwittingly offended us might actually have feelings too.

Let’s have a bit more empathy, eh, people? We in the West are in a good position to be nice to each other, yet we persist in biting smaller and smaller pieces off each other instead. Are we bored? Are we lacking in something to fight? Personally, I’m extremely fucking grateful I wasn’t born somewhere I could legally be married off while still a child; where my husband (whom I didn’t choose) could legally punish me for defying him in any way; where I couldn’t vote, work, or drive. Those are problems, big problems. Those are things that need addressing. Compared to this, a bit of comic book style artwork is nothing. At worst, it suggests that the wearer of such imagery finds women attractive. Oh, no! What a fucking crime.

I’ve read opinions online saying that, although this whole thing has been blown out of proportion, perhaps you should’ve known that the design on your shirt was inappropriate for the occasion. My question is: inappropriate, how? Was it weather-inappropriate? You were indoors, I assume you weren’t cold or you would’ve worn longer sleeves. Was it culture-inappropriate? Well, you were broadcasting from a country that doesn’t have proscriptive rules about what its citizens can wear. Work-inappropriate, then? I didn’t see anyone else being forced into a lab coat, so I assume yours is a modern workplace that doesn’t insist you make a parody or caricature of your job in order to be taken seriously.

Alright, so I’m being facetious. It was clearly “inappropriate” because some people might take offence. Hmm. So, in his position, not only would I not have been allowed to wear That Shirt, but I also wouldn’t have been allowed to have bare shoulders, because that might offend some Catholics, and I would have had to cover my hair, lest I offend some Muslims. I also probably would have had to wear high heels and a ton of makeup (neither of which I normally do), so I don’t challenge the traditional view of what a woman should look like on TV and give a few elderly viewers heart attacks.

It’s just too much. I’m not saying we should lead wholly selfish lives, being deliberately provocative all the time and yelling “fuck you, I’ll do what I want” to anyone who complains. But neither can we allow our actions to be governed by what we think others might be offended by. Apart from anything else, we might be wrong.

I was recently utterly enraged by a couple of articles on the Metro website, which claimed that women should know by now that it is practically illegal to venture out in public without first either shaving or waxing their underarms, and that to transgress this long-established social law is to announce to the world that they are disorganised, dirty, and lacking in self-respect and in that mysterious quality known as “class”. To let other people see your hairy pits, claimed the author, is both disgusting and unacceptable.

The articles focused on the so-called “major beauty faux pas” made by Pixie Lott at the London premiere of the latest Batman movie, at which she flashed a spot of pit fuzz; the journo in question likened it to a similar incident over a decade ago when Julia Roberts proudly aired her (admittedly rather more copious) armpit-carpet at the London premiere of Notting Hill. The photographers went nuts on each occasion, of course, which is why these non-events got in the news.

Stunned that such petty bile could be deemed true journalism, through a red mist I scanned the offending pages. I was looking for the name of this perpetrator of male chauvinism and despicable misogyny, this no doubt doddery old bastion of alpha male behaviour holding out stubbornly against the progressive views of a modern society. And then I found it. Amy Duncan. Hmm, that’s a funny name for a bloke.

Well, it turns out that I’m just plain old naïve – and, in my own way, sexist – because not only is this woman expounding the views I most commonly associate with “unenlightened” males, but she is very much not alone in this activity. Apparently, tearing down the fragile walls of female self-esteem is extremely lucrative – if you’re a woman. The Daily Mail’s “Femail”, for example, is a veritable breeding-ground for these shallow, scathing and often pointless attacks on women, by women. It’s big business – but why?

According to psychology studies conducted at two universities in Canada last year, women are programmed to behave this way. We’re in competition with other members of the same sex, and often feel threatened by those we perceive as more attractive than ourselves, which invariably leads to hostile behaviour, such as that which abounds in most newspapers and in every women’s magazine on the market. The authors of the studies, T. Vaillancourt and A. Sharma (both female, just so you know), maintain that once we have acknowledged this behaviour we can begin to address it. After all, if we were incapable of breaking our programming and of controlling instinctual behaviour, then rape and paedophilia would be socially acceptable. Saying that women are “born to be bitchy” (thank you, Claudia Connell of the Daily Mail, for that one) is really just an excuse for not trying to improve our behaviour – but I doubt that women like Amy Duncan will ever amend their views based on such silly things as rational arguments, scientific studies and the ideal of behaving decently to their fellow humans.

Oh, I should be sorry for picking on you, Amy – after all, you’re just one of many awful women who seem hell-bent on making the rest of us feel like shit, and singling you out sort of makes me as bad as you, I suppose. I promise, though, you were just the closest example to hand (I did try picking on Liz Jones, but that’s a real minefield there). I mean, come on – you’re condemning Julia Roberts for being “totally unaware of the furore she had created” when people caught sight of her armpit hair, all those years ago. You know why she was “totally unaware”? Because it wasn’t a “furore” to her; it wasn’t even an issue. And to judge by Pixie Lott’s lackadaisical Twitter response to this latest outcry, it isn’t an issue to her either, so your horrified bleating is a bit of a lost cause there as well. I’d love to know why this kind of thing bothers you – and so many other women – so much. Going by the results of Vaillancourt and Sharma’s studies, I would assume you feel threatened by these beautiful celebs, who are so imbued with self-confidence that they can happily attend high-class functions without worrying themselves into a frenzy over whether someone might be judging their armpits. Or perhaps you are genuinely disgusted by body hair on a woman, in which case I would imagine that you’ve been made to feel ashamed of your natural physical state over the years, which again points to low self-esteem. Is this why you’re trying to make other women feel insecure: so you’re not alone?

As someone who has always been just a bit paranoid about her own underarm hair, mostly as a result of knowing that these callow bitches are on the lookout, what surprised me most about the photos of Pixie and Julia was how un-gross a healthy crop of pit fuzz looked alongside a pretty dress. Sure, it was different, but it was also completely natural and entirely their own damn business. It’s emboldened me, pit-wise, I have to say. Certainly less “disgusting” than, say, a red-raw axilla cut almost to the bone by over-shaving, or sporting the red welts that so often come after a wax. I’m not in the habit of elevating pop singers and actresses as role models, but on this occasion these confident, carefree women are leading the way, whereas the venomous proclamations of Amy, Liz and all those other self-haters are just holding us back.